In America it seems like smartphones are ubiquitous. Everywhere you go, people are paying for their coffees, depositing checks, Snapchatting and Instagramming, and scheduling appointments from their phones. In fact, most people, when faced with the choice of choosing to give up their car, their laptop, or their smartphone, would let go of their phone last.

Why? It’s not because they couldn’t live without Instagram. It’s because smartphones have become a utility in our lives, as important to our daily functioning as electricity. That’s why refugees will wait hours for a YouTube video to load on a camp’s overburdened 3G network, if they can’t get WiFi from a volunteer carrying a hotspot in his or her backpack. Internet access from our smartphones is simply something many people can’t live without.

Last week we pointed out how this kind of digital access is still proving elusive to 80 million Americans — more than you would assume.

Globally there are billions of people who don’t have access to internet at all, much less a smartphone. These people are on the wrong side of a swiftly widening digital divide. In 2015, for the first time, more people in the UK identified their smartphone as the “most important device for connecting to the Internet” than did their laptop or desktop (33% vs. 30% and 14%, respectively), and this is heavily weighted to younger, lower income, and thin file segments of the population buying smartphones now (below). 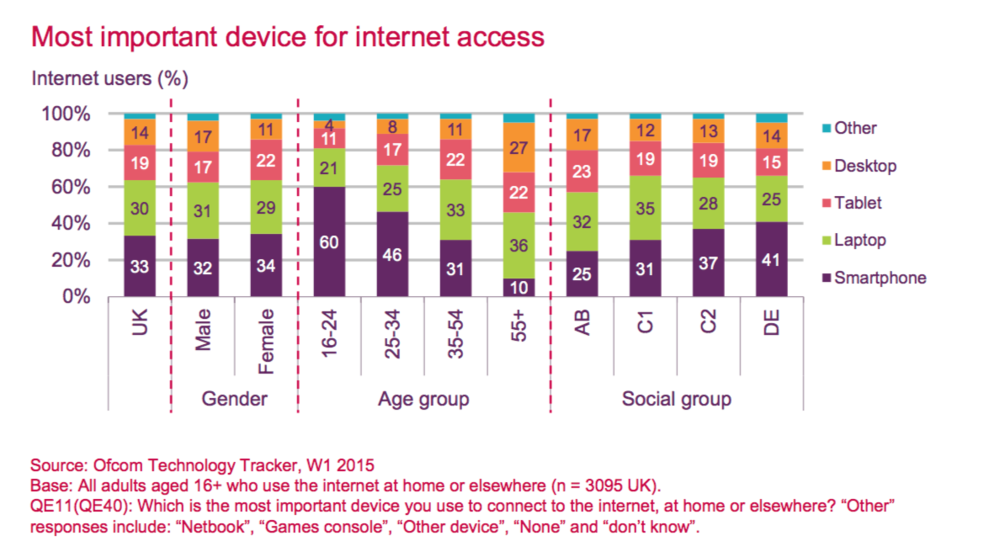 The smartphone is increasingly the main portal to the internet for the middle classes of the developing world, and adoption is running on a fundamentally different trajectory (below from Asymco).

But this does not capture the sheer number of people involved.  The chart below from Asymco provides a better picture (y axis is in millions of users), but is echoed by other studies showing that by 2020 four in every five smartphone connections will be in developing nations.

Those who don’t make the shift to an internet-connected mobile device will increasingly be cut off from from important flows of information. But perhaps more importantly, they are cut off from the most important tool for increasing financial inclusion that the world has ever seen. More than 2 billion people—roughly three-quarters of the world’s poor—do not have access to financial services. Being unbanked is more than an inconvenience: it can hold back economic productivity, disempower women, and discourage preventative health measures. Luckily, the increasing proliferation of smartphones can help.

Commercial uses of mobile phones can be surprisingly high in areas with low internet connectivity. One study found that fishermen in southern India reduced risk and boosted profits by sharing information on catch volumes and market prices via mobile phone. Another found that mobile-enabled communication between grain traders in Niger helped improve outcomes during the 2005 food crisis. This obvious value add is driving widespread adoption of smartphones outside of the West.

This trend is even more apparent when it comes to financial services. Studies have shown that the poor in countries like Uganda and Tanzania are much more likely to use mobile payments systems than they are to use bank-aided transfers, Western Union, or other methods. Companies that provide these services in developing nations are expanding rapidly. M-PESA, launched by Kenyan telecom giant Safaricom in 2007 as a system for microloan repayments, was used by two-thirds of Kenya’s adult population in 2013. At the end of 2013, there were 219 mobile money services in 84 countries sprinkled across Africa, Latin America, and Asia.

In the developed world, we often worry that the “digital trail” we leave on the internet will be turned against us. But for the unbanked in developing countries, this digital trail can help prove their creditworthiness in the absence of credit scores.

Widespread dispersal of smartphones could really go even further to serving the unbanked. In the developed world, we often worry that the “digital trail” we leave on the internet will be turned against us. But for the unbanked in developing countries, this digital trail can help prove their creditworthiness in the absence of credit scores. Startups like Lenddo and Affirm are already using social media identity as a proxy for FICO when making loans, while Socure uses similar information for fraud prevention.  This technique could work with poorer, more marginal populations as well. For instance, some researchers have suggested that microfinancial institutions could get a better assessment of potential borrowers’ creditworthiness by studying their internet activity.   So universal smartphone access can have a massive impact on being able to secure and extend credit.

Many hurdles stand in the way of full smartphone penetration. Perhaps the most important one is the simplest: smartphones are expensive. In the U.S., a new iPhone costs more than $650 without a contract. It’s true that cheap Android phones are proliferating in developing markets, many of them for the equivalent of $30 or less. However, these low-end phones don’t seem to be meeting the needs of the average user: the average Android phone purchased today still costs $220. For people without access to credit, this is a high bar.  Realistically, phones will need to be priced fundamentally differently to serve the next billion new users.

In economic terms, smartphones are an inelastic good: the more affordable they become, the more people will buy them. The last five years has seen an explosion of companies exploiting this low-cost trend, including Xiaomi, the so-called “Apple of China,” and India’s homegrown Micromax brand. The only way that more established corporations like Apple or Samsung will be able to compete is if they make their products affordable and approachable to poorer users.

With PayJoy, we can make make that a reality.  We enable any Android phone to become a pay as you go device through our proprietary locking technology.  We don’t require credit bureaus or other paperwork, and offer extremely low interest rates to anyone who is willing to put up a small downpayment, has a government ID, working phone, and Facebook account.

With contribution by Jill E. Merriman and Nathalie Lagerfeld of Hippo Reads.

One thought on “Smartphones and the Wealth of Nations”